White Truffle of Alba in the UAE

With the collaboration of the Italian Chamber of Commerce, Roberto’s Restaurant opened the season of the prized white truffle on 8 November, an Italian excellence and national pride, recognized as a champion of taste and undisputed king of the table. Although it is also found in some areas of Istria, the prized white truffle is widespread almost only in Italy and especially in Piedmont and Marche, where the municipalities of Alba and Acqualagna are located respectively. The fact that the white truffle is so difficult to find has certainly contributed to that long process that made the white truffle a real celebrity sought after all over the world.

Traditional and very successful with the public (beyond the particular moment we are experiencing the International Alba White Truffle Fair, it is an event that has reached its 90th edition today and which knows no crisis, thanks to its passionate customers, every year always more numerous.

This year, the 21st anniversary of the worldwide Alba white truffle charity auction saw five countries, Italy, Hong Kong, Moscow, United Arab Emirates and Singapore, participate – virtually – in the auction of the best species of white truffles of the year. In the hall of the castle of Grinzane Cavour, in the heart of the Langhe and in the midst of the International Fair dedicated to the precious underground mushroom, the best pieces collected so far will be beaten in a charity initiative. The auction, conducted by Caterina Balivo and Enzo Iacchetti, will be held in connection with Hong Kong, Singapore and Moscow, starting at 13.00 Italian time.

In Dubai the auction was broadcast in live streaming on the big screen of the well-known Italian restaurant Roberto’s from 4.00 to 5.30 pm, followed by a 5-course tasting proposed by the Executive Chef of the Roberto Group, Francesco Guarracino.

While Honk Kong took part in the live show from the Michelin starred “Otto e Mezzo Bombana” restaurant by three Michelin star chef Umberto Bombana, Singapore gathered in the National Gallery, and Moscow from the Bosco Cafe restaurant of the Gum department store in Red Square.

With a raise of 100,000 euros, Hong Kong was awarded the best specimen of white truffle this year weighing 900 grams. The proceeds from the sale of all lots will go to charity. 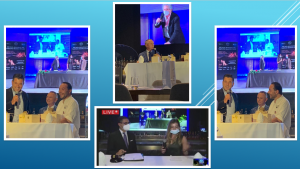 Passengers to the UAE can now register their vaccination status online