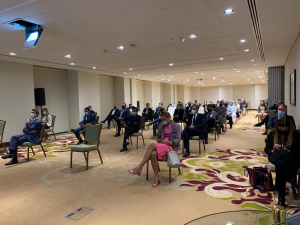 On November 22nd at 11:30 am, the General Assembly was held in the Meeting Room of the Millennium Plaza Hotel Dubai. At 10.00.

The meeting was opened at 11.30 by Sheren Khalil, Project Manager of the Italian Chamber of Commerce who introduced President Sheikh Mohammed Bin Faisal al Qassimi who welcomed those present, followed by a greeting and speech by Ambassador Nicola Lener.

From 12.00 to 15.00 there was the approval of the Report General Assembly: the Report e approved unanimously. The Assembly was then coordinated by the Secretary General Mauro Marzocchi who gave the floor to the Vice Secretary General Paolo Nazzari to present the activities carried out in 2019, followed by Beatrice Calabrese, Senior Trade Analyst of the IICUAE who presented the activities scheduled for 2020 sent to the Ministry of Economic Development and the activities actually carried out from January to November.

The debate for the approval of the activities was opened with excessive vivacity, an atmosphere that accompanied those present for the entire duration of the Assembly.

A particular moment was dedicated to the report by the IICUAE Treasurer, Stefano Campagna, who detailed the economic status of the Chamber, then leaving the floor to Basid Choudhary, Accountat of the Chamber of Commerce to present the budget and costs; while the report on human resources and the situation of the Chamber was presented in detail by the Director Piero Ricotti.

At 5.30 pm the counting of votes begins, with the collaboration of Pietro Paolo Rampino, Antonio Varvaro and Mauro Marzocchi. At the end of the count, there is a difference between the number of votes available and those actually scrutinized. At that point, the Assembly decides to postpone the vote to a specific General Assembly which will also review articles 7 and 8 of the Statute.

The Assembly ends with the greetings of the President and the decision to postpone the elections of the 6 new members of the 2020-2025 Board of Directors to 13 December 2020.

The Assembly was opened by President Sheikh Mohammed Bin Faisal Bin Sultan al Qassimi who gave the floor to the Senior Trade Analyst of the IICUAE Beatrice Calabrese, who presented the proposals for articles 7 and 8 of the Statute which were approved at the unanimity.

Then there was the speech of Secretary General Mauro Marzocchi, at the end of which he proposed the open vote by show of hands of the six new Directors, voted unanimously.

The new Board of Directors is composed as follows:

Below is the complete Report presented to the Assembly: