Italy’s fabulous five: what to see

Italy’s fabulous five: what to see
The Cinque Terre are the more natural and charming of Liguria and of the Tyrrhenian Coast: Riomaggiore, Manarola, Corniglia, Monterosso and Vernazza are the towns suspended between sea and land which create the so-called Cinque Terre. These villages belong to the National Park and since 1997 they are part of the UNESCO Patrimony. Here below we suggest you what o visit…don’t miss them! 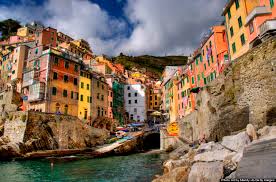 RIOMAGGIORE
It’s very evocative walking among the characteristic small, narrow streets of this village, where lights and shadows create very particular effects. The singularity of Riomaggiore’s houses stays in the fact that all of them have two doors: one positioned on the front near the alleyway, the other one located on the back, at the level of the top street. In Riomaggiore starts the famous Via Dell’Amore (Love Street), a path hollowed out in the rock which leads to Manarola. 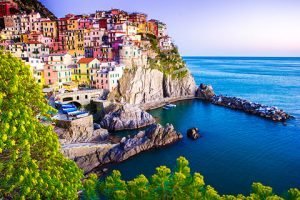 MANAROLA
Manarola is a light-colored painting , the reign of olive groves and grapevines, a characteristic village in which the houses appear to be natural extensions of the narrow and lengthy street. In the lower part of the village you can still appreciate the old mil, total renew by the National Park. Fair and haughty, on the top of the town, stands San Lorenzo Church, built in 1338. 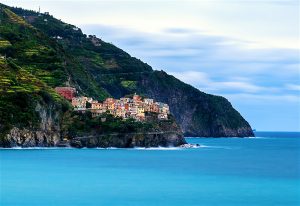 CORNIGLIA
In the delicious village of Corniglia you can visit the interesting Gothic parish of San Pietro and the eighteen century’s square of Taragio. Corniglia is a precious rough jewel, composed by small alleyways and narrow street, carved into the rock, with an amazing beach made by pebbles, the so-called Spiaggione. 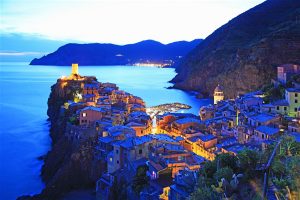 VERNAZZA
Located on a imposing cleef, Vernazza nowadays rests peaceful, with respect to the past during which it was used to be the starting point of the naval forces. The magic atmosphere of the ancient medieval village of Vernazza will enchant you: mysterious and enigmatic narrow streets, hided from the small and pretty red, yellow and pink houses. You can dedicated yourself in visiting the Church of Santa Margherita of Antiochia and the remains of the ancient fortified structure of the city: the Tower of Sighting dated Xi Century, the Doria Castle, the Torre del Convento and the Belforte. 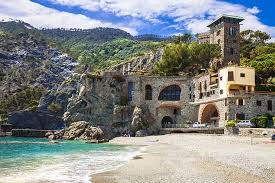 MONTEROSSO
Monterosso Al Mare is the land beloved by Eugenio Montale. Still in these days it maintains the long tradition fisherman’s tradition and bears the signs of the ancient sea battles: the Medieval Tower, today steeple of San Giovanni Church, the Castle overlooking the sea which includes three round towers and Aurora Tower, the last one of the thirteen towers which used to protect the sea during the XVI Century. .