Puglia does it better!

Puglia does it better!

Among the beauties of Puglia it is difficult to establish the best ones to be seen. The Chamber tries to identify the best places to visit which fix the tastes of every kind of tourist. 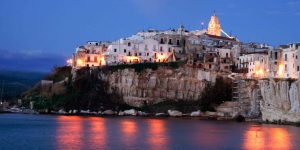 VIESTE
A wide fortress overlooking a clear sea. Broad beaches and a lot of wind, for the lovers of windsurf and kitesurfing. Bays and amazing coves to walk relaxing. After the day spent in the beach, don’t forget to visit also the small harbor, form which, everyday, several boast towards the neighbors Tremiti sail and where it is possible to admire the trabucchi, the ancient fishing installation. 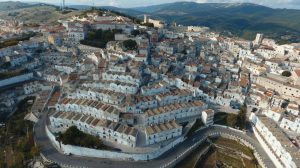 MONTE SANT’ANGELO
Monte Sant’Angelo stands over a calcareous spur of the Gargano, a perfect view to photograph the Tavoliere delle Puglie and its large expanses of olive groves, wheat and grapevines. The soul of Monte Sant’Angelo is Junno district, the ancient one off the City, with its houses built in bunches, leaning one against each other and linked by arches and staircases.. We are talking about rural buildings, which ensured to farmers that used to leave in these houses a physical and cohesive proximity.

CASTEL DEL MONTE
Built in the XIII Century by the Emperor Federico II, patrimony of the Humanity as by UNESCO since 1996, this octagonal building remains one of the bigger enigma of the ancient monumental architecture. The mystery, still now unsolved, is related with its function: was it a really castle, a hunting lodge or an astronomical temple?  Nowadays, the last hypothesis seems to be the truthful one, but probably nobody will be able to expainy why the Castle has been built. 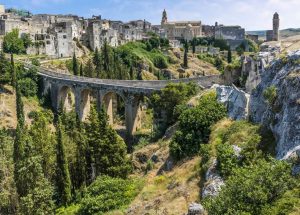 GRAVINA IN PUGLIA
This city in the province of Bari, at borders between Puglia and Basilicata, was for Federico II the city that “Grana dat et vina” (offers wheat and wine): the reference of the Emperor was to the exterminate camps desalinated to the cultivation of wheat and wines, that still today remains an important part of the town’s economy. 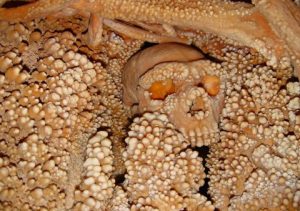 ALTAMURA
Altamura is one of the most important city in the world in terms of archaeological sites. In 1993, in the Lamalunga cave, was discovered the “Altamura Man”, an intact human skeleton dating 200 thousand years ago, noways visible at the Masseria Ragone. In 1999, in the location called Pontrelli, were identified in a cave 30.000 dinosaur footprints, that used to live in this area between 70 and 80 million of years ago. 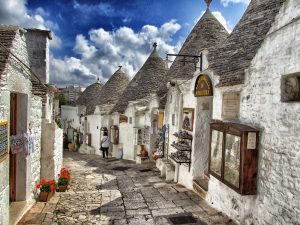 ALBEROBELLO
Famous worldwide for its trulli, Alberobello was included in the 1996 in the UNESCO’s Patrimony. A curiosity: despite the Counts of Coversano, the ancient owners of this territory, have obliged the farmers to built them in a dry way, without mortar, to save money, nowadays these ancient stone constructions are still here. 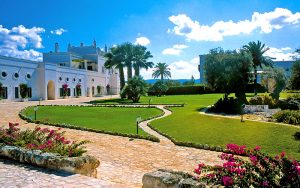 MASSERIA SAN DOMENICO, SAVELLETRI
It is the farm of the farm, born from the restructuring of a tower of sighting dated XV Century, loved by all the Hollywood VIP, which are used to organize marriages here. It is here that Goldie Hawn moved all the furniture to ensure that they were “feng shiu” and it is here that Darly Hannan eat in the garden.

OSTUNI
Known as the “white city” due to the whitewashing in lime of the houses, used in the past as it was cheap and also for defending the city from the plague (the lime is an amazing natural disinfectant), today Ostuni is one of the must-to-see destination of Puglia. Walinkg in its historical center, among white alleyways, will make you feel relaxing and enjoying the true Pugliese spirit, a mix between simplicity and beauty that you are not able to find anywhere else in the world.

LECCE
Called “the Florence of the South,” Lecce is the provincial capital of the Salento area, only 12 km away from the Adriatic Sea. The city, which has strong Messapian roots, was known to its Roman rulers as Lupiae. Today, it welcomes visitors with its magnificent baroque architecture, which blazes on the portals of its palaces and on the facades of the many churches that line the streets inside the city’s three ancient gates: Porta Rudiae, Porta San Biagio and Porta Napoli. 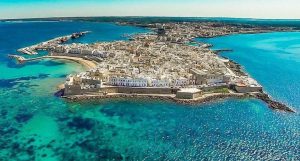 GALLIPOLI
The seaside town of Gallipoli, whose name means Beautiful City, rests like a mirage on the Ionian coast, roughly 40 km (25 miles) from Lecce. The old town, perched on a limestone island, is connected to the new part of the town, on the mainland, by an arched bridge built in the 1900s. Another bridge to the port has recently been added. The walls, bastions, and towers, which originally defended the town from invaders, today protect it from rough seas, while also preserving the charm of days gone by.

The best Trekking Paths to be done in Italy
IICUAE Press 5 Agosto, 2019

What to see in Friuli Venezia Giulia?
IICUAE Press 22 Aprile, 2018

“I would like, if I may, to take you on a strange journey”

The best Trekking Paths to be done in Italy

What to see in Friuli Venezia Giulia?