Nestled on majestic mountains, immersed in fabulous landscapes or lapped by the waters..The Italian castles, so different one to each other, tell us histories so far from us, on the borderline between realty and legend. Lead yourselves be conducted among crenelated walls, towers, curiosities and ancient characters. 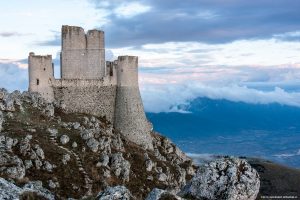 Rocca Calascio, Abruzzo
Inside the Gran Sasso e Monti della Lega National Park, at 1460 meters of height, it is located Rocca di Calascio, in province of L’Aquila. The majestic medieval structure, completely constructed by white stone, is one of the highest in Italy. Nestled among the mountains, the ancient underlying village, today inhabited. Its undoubted charm made it perfect for several films, among which the unforgettable “Lady Hawke”, “The Name of the Rose” and “The American”, with George Clooney. 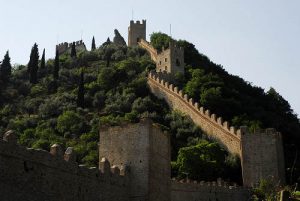 Castello di Marostica, Veneto
In reality, the castles are two, Superior and Inferior, linked by a walled enclosure of 1800 meters of length. In the pretty small town it is possible to enter the historical center characterized by Pizza degli Scacchi through four doors located along the walls. Every two years, in this place it is played a true match between alive characters in costume. In front of the Inferior Castle it is located the Doglione, well-known also as Rocca di Mezzo, in the past a toll house. 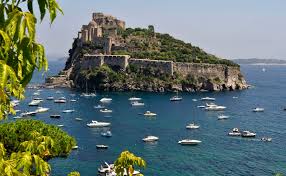 Castello aragonese di Ischia, Campania
The Castle is located on a small island, linked through a walled bridge to the Borgo di Celsa, today known as Ischia Bridge. Thanks to Alfonso V D’Aragona, the access to the Castle is possible through a tunnel, hollowed in the rocks. Before that, it was possible to access only by the sea. The tunnel, 400 meters long, is illuminated by tall skylights that, in those times, acted also as “piombatoi” from which hot oil, stones and others materials were plunged on the enemies. In this Castle, in 1952, some parts of the movie “The Crimson Pirate” with Burt Lancaster were recorded. 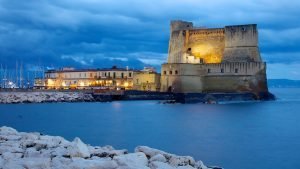 Castel dell’Ovo, Campania
Castel dell’Ovio is the ancient castle of Naples and, not by coincidence, is one of the significant elements on the famous landscape of its Gulf. It has no more his original aspect due to several reconstructions during the centuries. Its name comes from an ancient legend: the Latin poet Virgilio, famous also as a wizard in the Middle Ages, hide in its secret parts an egg with the ability to keep up the overall construction. Its breaking would have caused not only the collapse of the Castle, but also a round of catastrophic rumors in Naples. During the XIV Century, the Castle suffered considerable damages: to avoid the diffusion of the panic among the population, the Queen had to swear to have turn the egg. 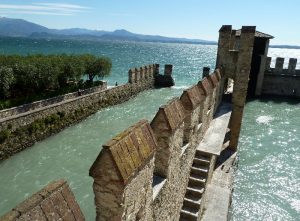 Castello Scaligero d Sirmione, Lombardia
One of the most complicated and better conserved Italian castles. It is a rare example of lacustrine fortification. The Castle is watered on all sides by Garda Lake. On one side there is the dork, one time refuge for the Scaligera fleet. The walls and the Three greatest towers have swallow-tall battlements. Beyond these ones it is located the majestic dungeon: under this one there are situated the cells meant to the Prisoners. It is possible to pursue the paths and reach also the top of the dungeon, as well as admire the splendor the harbor. An ancient sad story legend says that in the stormy nights, the soul of Ebengardo wanders through the Castle looking for his Arice… 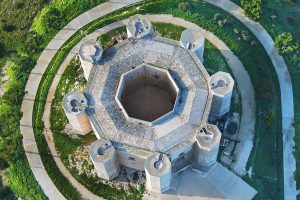 Castel del Monte, Puglia
Without any doubts, one of the most mysterious Castles of Italy. Castel del Monte is a building of the XIII Century and its construction was decided by the Emperor Federico II in the actual Andria Municipality on a hill of 540 meters of height. It has an octagonal plant with an octagonal turret for each edge. It has narrow spiral stairs definitely unconformable for reasons of defense and escape, silts too tight for lancing darts and neither stables as well. Definitely it was constructed following precise mathematics-astronomical geometry and taking into account several symbolism as well. 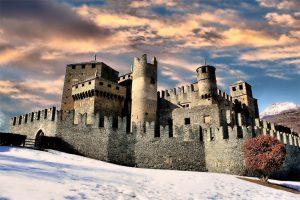 Fenis Castle, Val D’Aosta
A scenic structure: its position on a sweet hill and its elegant crenelated walls bring you thinking about a representation function almost fairy-tale, rather then defensive. It is one of the Medioeval castle better conserved in Italy. Masks with a apotropaic function on the walls, a fresco figuring San Giorgio that kills the dragon, the courtyard with a range of assays (one different with respect to the other) which support parchments reporting sayings in French. 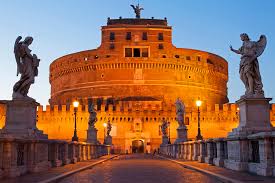 Castel Sant’Angelo, Roma
The Castle is located on the right side of the Tevere, near the Vatican, with which is linked by a fortified corridor. It has been modified several times and several spaces have been dedicated to jails. The worst prison was the one called Sammalo’: the prisoner was located inside from the ceiling and, due to the limited space, he wasn’t able neither to stand or sit. Some of the cells were reserved to politicians and others to important personalities and it was impossible to escape from them. The name of the Castle comes from a Vision of Papa Gregorio Magno: Micheal the Archangel that was sheathing the sword. The dream was seen as a sign of the end of the plaque and that really happened. To celebrate the fact, a stature of an Angel was located at the top of the Castle. 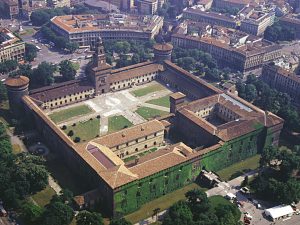 Sforzesco Castle, Milan
It is one of the main symbol of Milan and of the history of the City. It was built in the XV Century by Francesco Sforza, on the rests of earlier fortifications, but, during the years, it was subjected to several changes. The fortifications’ belt more external, called “Ghirlanda”, is the oldest part. The four corners are made by towers, each of them oriented towards one of the cardinal points and they have different shapes: Cylindrical for south and Est, squared for North and West. All the perimeter is circulated by the ancient moat, noways not flooded anymore. The Filarete Tower, the highest and the most central one, is also the principal entry. The back facade is the ancient one and here it is also located the so called Ponticella di Ludovico il Moro, a bridge structure which was used to link the ducal apartments with the external walls, nowadays destructed. In his room, Ludovico closed himself due to the lost of his wife Beatrice d’Este and, for this reason, the rooms were hereinafter called “Salette Nere”. 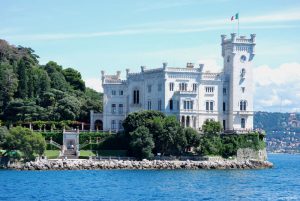 Miramare Castle, Trieste
Surrounded by an amazing park, it stands above the sea, looking the Gulf of Trieste. The Castle was constructed for decision of the Archduke Fernando Massimiliano d’Asburgo, to share it with his wife, Carlotta from Belgium. It is a luxury house which conserves its original precious furniture. In the park it is also located the Castelletto, a smaller building that was used as a temporary residence for the spouses during the construction of the Castle. The only issue is the sad love story of the couple: Carlotta drove crazy after the homicide of her spouse in Mexico and both the Castle and the Castelletto became the sad scenario of the unfortunate destiny which not allowed them to live in this amazing residence.